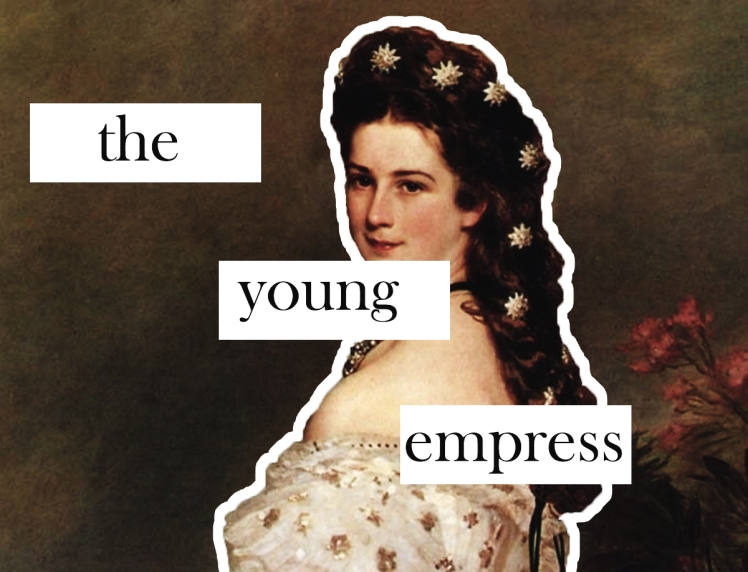 I think that it’s safe to say, that everyone has a favourite historical figure. I actually have a few of them. I wanted to create this series to write about my favourite people from history and bring their stories to life once again. Today, I want to talk about Elizabeth of Austria.

My aunt was obssesed with Sissi, ever since I can remember. Her library was full of Sissi biographies and novels about her. She had her pictures around her room and she even visited Vienna to see how her favourite queen lived. When I was about eleven she showed me the austrian movie trilogy Sissi with Romy Schneider. I loved those movies and I understood why she loved her so much. I started reading more about her, sadly I found out, that her life wasn’t nearly as glamourous as it has been portrayed. As I researched more about her tragic life the perfect woman I have pictured her as began to crumble. She was a human like everyone else with her own flaws and demons. That made me like her even more.

Elizabeth was born in 1837 in Bavaria. She was the fourth out of 10 children of Duke Maximilian and Princess Lodovika. Her mother was the half sister of the king of Bavaria. Sissi’s father hated  restrictions of the court and he and his family lived far away from the king to have their freedom. Sissi and her siblings had a childhood free from formality of the court. Maximilian loved hunting, travelling and folk music. Her very liberate upbringing added to her later feuds with her mother-in-law.

Sophie of Bavaria, wife of the Archduke Franz Karl was the sister of Sissi’s mother. Sophie was very traditional and stirct described as “the only man in the Hofburg“. She loved all her children, especially Franz Joseph the heir to the empire. That’s why she wanted to marry him to her niece, Sissi’s older sister Helena. Lodovika took fifteen year old Sissi with her and Helena to Austria meet the young prince and arrange their marriage. Franz was taken by Elizabeth’s beauty and decided to marry her instead of her sister. They married in Vienna in 1854.

Sissi had a hard time adjusting to the formality of the royal court. Franz loved his wife, but Elizabeth was so much different than her duty-loving, strict and traditional husband. His attempts to keep her home with him, only drove her away from him. Sissy gave birht to her first daughter Sophie only ten months after the wedding. Her mother- in- law named the child after herself and took complete charge of he girl’s upbriging. When Sissi’s second daughter was born a year later Sophie did the same with her. The strained relationship with her mother continued througout her entire life. Sophie critisized Elizabeth for being “silly” and for not giving the realm an heir.

She loved poetry and wrote poems of her own. Mental illness was prominent in her family and she did a lot of charity work for people in mental asylums.

Sissi was a wanderer just like her father. She loved to travel and escaped Vienna everytime she had the chance. She visited Hungary for the first time shortly afer the wedding and fell in love with the country and its people. This trip however was tragical for her. Both of her children became ill with diarrhea. Her first-born Sophie tragically died and Elizabeth has never recovered from the tragedy. In the mourning of her death Elizabeth starved herself. She was striken with depression that would accompany her for the rest of her life. Her obssesions deepend as well.

People admired her beauty and slim and slender physique and some say that her appearance was the only source of her self esteem.Sh was obssesed with  maintaining her weight at 50kg. Whenever she would gain weight she would fast for days. Her beuty routines were incredibly demanding as well. Her long hair took two hours to brush and style and she would often use this time to practice her Hungarian. She slept wihnout a pillow to mantain her posture and she would apply face mask every night, she took cold showers in the morings and bathed in olive oil every night. After the age of thirty she would not sit for any portraits or photographs to mantain the illusion of her ageless beauty.

In 1858 she gave birth to her only son Rudolf. She secured her position in court and Franz was happy, that the realm finally had an heir. Elizabeth was once again banned from controlling her son’s upbriging she began to be prone to illnesses that today we believed were caused by stress. She spent the next two years recovering in Greece as well as her parent’s house in Bavaria. When she returned to Vienna she once again used every excuse to escape the court as well as her husband’s bedroom.

However she decided later to have a fourth child. With her returning to marriage she helped ensure Hungary as and equal partner to Austria. She spent her entire pregnyncy in Hungary and her daughter Marie Valerie was dubbed the “Hungarian child”. Her last daughter was the only child Elizabeth has brought up by herself withnout the influence of her mother in law. Still she would travel a lot and saw very little of her children.

In 1889 Elizabeth’s life was struck by tragedy once again. Her only son Rudolf killed his lover and then himself at age 30. After that Sissi traveled more and fell deeper and deeper into depression. Around that time her husband developed a relationship with a Vienna actress that lasted for the rest of his life and remained platonic. It was tolareted by Sissi, who spent almost no time with her husband.

In 1989 a 60- year old Elisabeth was walking down the street in Geneva when an italian anarchist Luigi Lucheni stabbed her in the chest. She was carried back to the hotel and died later that day. She was the longest reigning Empress of Austria.

There you have it. Tragic life of a troubled woman.

the cold air invades your lungs like hundreds of knives, you shiver and sit on a ground wearing your pyjamas,

we light up our cigarettes and the smoke reminds us of a time long forgotten and memories half-lived.

Sunrise after a hot July day, we’re both exhausted from insulting our friends and drinking old beer,

we ignore the beautiful sun like we ignore ourselves and you laugh and think of love I wanna go to sleep,

we listen to my souls’ unexpected whispers.

This is my story, but I’ve encountered many people who share my experience. I want to know why at 12 my future shone bright like a diamond and at 23 I’m a two-time college dropout with depression.

I’ve thought about my academic downfall a lot, mostly in the middle of the night and there is really only one reason I can think of. Studying. Not in class, but at home. See the problem is that, in middle school I never had to study and I still had amazing grades. When I was in high school, the subjects got a lot harder and more demanding. I realized that in order to keep my grades perfect I had to study at home. Except I didn’t know how, after all, I have never done it before. I hated it, it sucked. So I decided not to do it. Not my best call, but I am afterall incredibly lazy by nature.

Except what if it wasn’t laziness? What if it was fear. For the first time in my life I wasn’t good at something. It scared me. I, the golden child, the pride of my family was failing. I was miserable. I knew I couldn’t keep up with my achievements, so I didn’t try anymore.

There have been many events in my life I tried to identify as the reason for my depression. I found many potentional reasons and this seems as good as any. Sometimes I dream about the future I was promised, the one I never got to have.

because I forgot how to write

to let the pain go

to kill the voices

just to do something

it’s been a while I know. Couple of things changed, since I last posted here. I dropped out of college. Again. I am now officialy a two- time college dropout. Yaayy. What can I say. Education just isn’t for me anymore. I will write a post about the gifted children’s depression phenomena later this month where I hope to explore why all the great middle schoolers get depressed in high school.

So, I have entered the workforce. I am now a part of capitalism. As you can imagine I hate it very much. I work in retail, I’m a little over-qualified for that, but if my second college experience taught me anything it’s that I cannot handle stress. That’s why I chose a relatively low-stress job. While the stress is contained there are customers on the other hand, who easily are the worst kind of people on the planety so yeah, nothing is perfect.

My sister got married last month. It was a lovely outdoor wedding. The weirdest thing about the marriage is that we now both have different surnames and our little sister has a different surname. It’s very weird. My best friend will be moving here next week. She and her boyfriend got engaged and she will be moving with him, he’s renovating a house for them. Finally she will live closer to me and I will be able to hang out with her regualry.

I’ve been watching Lucifer on Netflix and I really like it so far, check it out if you like supernatural, crime and great characters. I also watched the new Stranger Things season and I loved it! It was much better than the second one, though worse than the first one. So, naturally I’ve been listening to Don’t mess around with Jim for two weeks straight now.